In addition to smart phones and mobile devices, there are many other components that can be part of a local area network.Some examples of network components are personal computers, servers, networking devices, and cabling. These components can be grouped into four main categories: 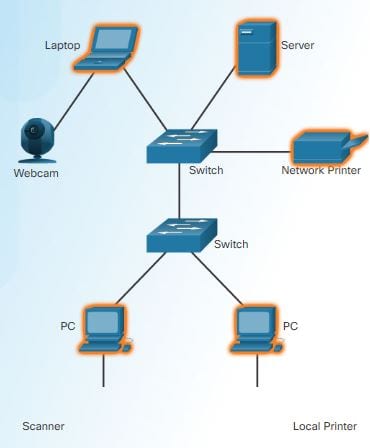 The network components that you are probably most familiar with are hosts and shared peripherals. Remember that hosts are any devices that send and receive messages directly across the network.

The network devices, as well as the networking media, are used to interconnect hosts. Networking devices are sometimes referred to as “intermediate devices” because they are usually located in the path that messages take between a source host and a destination host.

To physically connect to a network, an end-user device must have a network interface card (NIC). The NIC is a piece of hardware that enables the device to connect to the network medium, either wired or wireless. It may be integrated into the device motherboard or may be a separately installed card.

In addition to the physical connection, some configuration of the operating system is required for the device to participate in the network. Most networks connect to the Internet and use the Internet to exchange information. An end-user device requires an Internet Protocol (IP) address, as well as other information, to identify it to the other devices in the network. As shown in the figure, there are three parts to the IP configuration which must be correct for the device to send and receive information on the network: