Multiple Roles in the Network

A computer with server software can provide services simultaneously to one or many clients, as shown in the figure.

Additionally, a single computer can run multiple types of server software. In a home or small business, it may be necessary for one computer to act as a file server, a web server, and an email server. 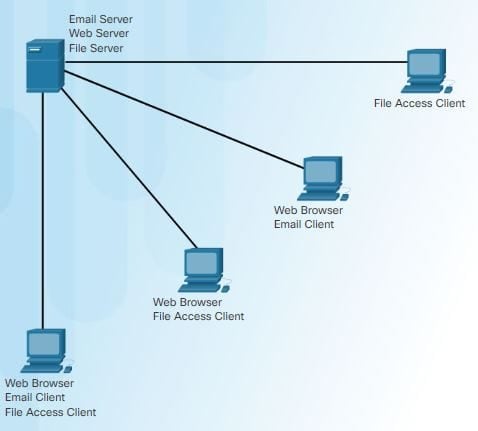 Multiple Roles in the Network

A single computer can also run multiple types of client software. There must be client software for every service required. With multiple clients installed, a host can connect to multiple servers at the same time. For example, a user can check email and view a web page while instant messaging and listening to Internet radio.

The path that a message takes from its source to destination can be as simple as a single cable connecting one computer to another or as complex as a network that literally spans the globe. This network infrastructure is the platform that supports the network. It provides the stable and reliable channel over which our communications can occur.

Devices and media are the physical elements, or hardware, of the network. Hardware is often the visible components of the network platform such as a laptop, PC, switch, router, wireless access point, or the cabling used to connect the devices. Occasionally, some components may not be so visible. In the case of wireless media, messages are transmitted through the air using invisible radio frequency or infrared waves.

Make a list of the network infrastructure components installed in your home network. Include the cables or wireless access points that provide your network connections.

The network devices that people are most familiar with are called end devices, or hosts. These devices form the interface between users and the underlying communication network.

Some examples of end devices are:

An end device (or host) is either the source or destination of a message transmitted over the network, as shown in the animation. In order to uniquely identify hosts, addresses are used. When a host initiates communication, it uses the address of the destination host to specify where the message should be sent.

What Does Peer-to-Peer mean?

The simplest peer-to-peer network consists of two directly connected computers using either a wired or wireless connection. Both computers are then able to use this simple network to exchange data and services with each other, acting as either a client or a server as necessary.

Multiple PCs can also be connected to create a larger peer-to-peer network but this requires a network device, such as a switch, to interconnect the computers.

The main disadvantage of a peer-to-peer environment is that the performance of a host can be slowed down if it is acting as both a client and a server at the same time. The figure lists some of the advantages and disadvantages of peer-to-peer networks.

In larger businesses, due to the potential for high amounts of network traffic, it is often necessary to have dedicated servers to support the number of service requests.